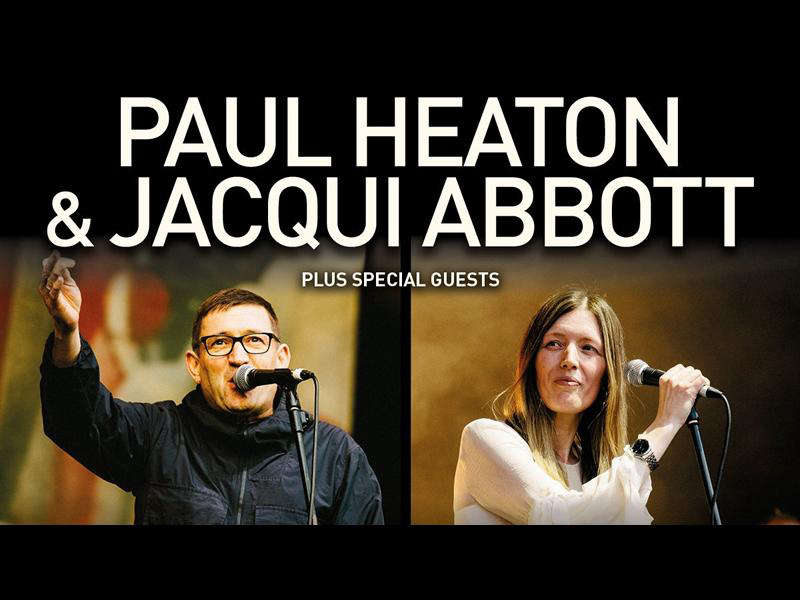 English singer-songwriter Paul Heaton, most famous for his roles within The Housemartins and The Beautiful South and for writing hits such as Rotterdam, Don't Marry Her and Perfect 10.

Jacqui Abbott was the female lead singer with the band The Beautiful South after 1994, following the departure of Briana Corrigan. The band were arguably more successful with Abbott on board, releasing several Top 10 singles. Amongst their most successful hits during her stint were: 'Rotterdam', 'Perfect 10', 'Don't Marry Her' and 'Dream a Little Dream of Me' (cover).

Abbott was discovered by Paul Heaton, the Beautiful South's other lead singer, after she and a friend met him outside a night club. Heaton invited them to a party, where Abbot's friend encouraged her to sing. Heaton was impressed with her singing, and later invited her to audition to replace Corrigan. She left the band in 2000, because of the pressure of touring, to concentrate on looking after her son, who had just been diagnosed with autism. Jacqui Abbott reunited with Paul Heaton in June 2011 to perform in his musical The 8th and has continued to gig with him.

The Proclaimers embark on a 35 date UK & Ireland tour. 2018 had seen their ‘Angry Cyclist’ album released to immense acclaim, becoming their 8th UK Top 40 album debuting in the UK Official Album charts at 17 and at number 3 in the UK Official Independent Album Charts. The Proclaimers “Angry Cyclist World Tour” began in July 2018 and ended in September 2019, 111 shows in 14 countries to over 400,0000 people. The tour began in Stroud, England and ended at The Hydro in Glasgow. The tour included their biggest ever tours of Scotland, England, Canada, New Zealand and Australia and notably in June 2019, The Proclaimers opened The Pyramid Stage for their 7th appearance at Glastonbury. The Proclaimers July 2019 Edinburgh Castle concert sold out in just under 10 minutes with Castle Concerts reporting this as the fastest sell out in their 25-year history. A second show at Edinburgh Castle was added, this show also sold out within 24 hours, which Castle Concerts reporting as never before seen demand. Strikingly individual, twin brothers Craig and Charlie Reid emerged 35 years ago with their debut album This Is The Story and Top 3 single ‘Letter from America’. Since then their enduring appeal across generations has have over the years seen them enjoy huge success across the globe. The Proclaimers songs are timeless, capturing a gamut of human emotions, written with poignancy, emotional honesty, political fire and wit. Their songs feature at weddings, funerals and everything in-between and there is one song, an early celebration of falling head over heels in love that is known the world over and has become a staggering global anthem. There are many others that have gained great popularity in different parts of the planet and then there is a wide cross section of sublime songs embraced by a multitude that has kept up with The Proclaimers studio albums, compilation collections and extensive touring over three decades. The Proclaimers have carved out a niche for themselves in the netherworld where pop, folk, new wave and punk collide. In the process, they have enjoyed Gold and Platinum singles and albums in UK, USA, Canada, Australia and New Zealand. They have even inspired a musical, the play and film Sunshine on Leith. The movie was the fifth highest grossing Independent UK film of 2013. The musical has its fourth UK run from April to June this year, with its biggest production to date by West Yorkshire Playhouse. 2018 also marks the 30th anniversary since the release of the Sunshine On Leith album. On BBC Radio 4’s Desert Island discs, David Tennant describes his first track by The Proclaimers - "I could have chosen any and every track from this band, probably my favourite band of all time. They write the most spectacular songs, big hearted, uncynical passionate songs."

The event runs from 5:30pm to 9:00pm on the following dates.
Select a date to add this event to your calendar app.